Why choose a catamaran?

With Powercats increasing in popularity theres no question that catamarans offer many advantages over monohulled boats. Once you truly understand the benefits of a powercat over a monohull you wont look back.

Should you lose power in one engine you can get home safely on the other and with many setups still get the boat on the plane. The independent steering means you still track straight and turn with ease getting you home safely. Match this with independent fuel tanks and starter batteries for even greater peace of mind.

A powercat’s twin hulls focus the buoyancy around the outside of the boat, rather than in the middle, creating much greater stability. Wide beam monohulls do exist and they can provide a smooth rider. They do, however, produce a much greater wetted surface, which produces more drag and consequently affects fuel economy. The flatter deadrise of a beamy monohull also compromises its rough water attributes and dryness from bow spray. 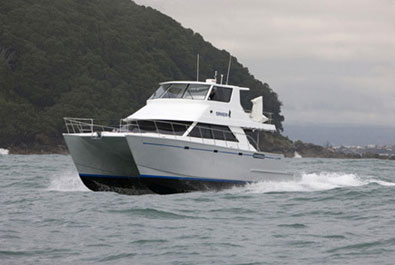 A Smooth and Stable Ride

Underway, a well-designed powercat, whether of a planing, semi-displacement or displacement hull type, will produce a much smoother and stable ride than the average monohull. (Note: Some very heavy, and some narrow hulled displacement monohulls can give exceptionally smooth rides but other factors, like excessive rolling, nullify the benefit.)

A powercat at speed gains lift and cushioning from spray and air being pressured through between the hulls. As well, there is the obvious advantage of two narrow hulls slicing smoothly through the waves. Think of the benefits when cooking, when travelling long distances, and when striving for a good night’s sleep!

More beam means more useable space inside a powercat, and around the decks. Without the ‘pointed’ shape of the bow of a monohull, a powercat gains considerable deck space forward.

The wingdeck area does encroach into a powercats internal accommodation but designers have found very clever ways of getting around this, more often to the boat’s advantage. The separation of the hulls in larger catamarans creates two separate spaces that can be though of as two accommodation wings. 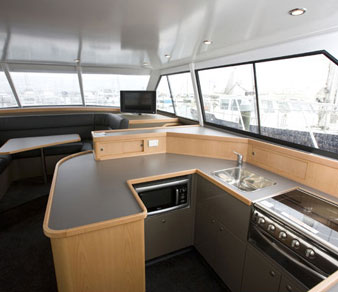 Great use of underfloor areas

Two hulls also offer greater use of underfloor areas – all space can be used for berths, tankage, refrigeration and accessible stowage

Few boaties would argue against the desire to own a fuel efficient boat. Published trials have shown that between a planing powercat and a planing monohull there is very little difference. The cat takes a little more power to get up on the plane but then tends to run more efficiently.

The powercat with displacement hulls is a different beast altogether. Depending on the hull sizes it is not unusual for ultra efficient speeds well in excess of 20 knots to be achieved in the economical displacement mode. Hence the proliferation of large catamaran ferries in service all over the world.

Fuel economy is a major consideration when running any business!

These same ferry owners recognise that powercats are able to carry much greater loads without significant loss of stability or performance. Overload a monohull and you may unleash an unstable monster.

Under way you cannot beat a powercat for dryness. The days of gallons of water sluicing across your windscreen when in a beam sea will be gone forever. The narrow hulls slice through the water throwing minimal amounts of water up for the wind to toss back at you, whereas many monos, at even moderate speeds, tends to throw large amounts of water much further out to the side, and up, for the wind to catch.

Shipyards tend to like hauling out a catamaran because they can be sat on blocks and require no lateral support. Smaller powercats with legs or outboards can even be beached.

Finding marina berths is generally not a problem. Unless excessively beamy, powercats merely fit more snugly into a berth and utilise the whole area.

Because of the need to build two hulls to create a powercat, the building costs will be greater than the monohull of similar length. However, the lengths of the two boat types do not equate in terms of space.

It is said that a 10 metre powercat equates in size more to a 12 metre monohull, a 12 metre to a 15 metre and so on. Hence, if your purchase is based on available deck and internal space, the powercat will actually be cheaper when lengths are compared.

Granted, a second engine does effect the costings, though these days twin installations in all power boats is becoming more common for people who like the reliability of twin engines.

The ultimate test as to the merits of a powercat is a sea trial. When you are belting through a short 2 metre sea at 20 knots, there is no spray lashing against the windscreen, Mum’s leaning back reading a book, and the beer glass in your hand does not threaten to smash your front teeth each time you sip, then you will understand why powercats will soon rule the waves!

Our latest boats and news delivered straight to your inbox.